I was born in 1972. I think the 70’s were one of the most magical decades for Christmas. We used to deck out our tree in big fat colored bulbs, and that none-too-subtle big fluffy silver tinsel garland. Oh and I remember the ornaments…the candy canes Mom used to put on the tree that our fox terrier Jiggs used to lick and eat off the bottom row of the tree. Our tube TV with its dials played claymation specials while I watched Dad string the lights and Mom position like a science, the ornaments like the ones made out of clothes pins that were decorated to look like toy soldiers.

There were tons of nostalgic ones. When my brother and I got old enough, Mom divided up the family ornies from our childhood, and gave us each a treasure chest of goodies to hang on our adult trees. fast forward to 2007, I had just moved to Philly to take the job at QVC. I lived in a 3rd floor apartment in an old historic house, and for all its charming architecture, it had a musty wet humid basement. That’s where I stored my holiday decorations. Sadly, the wetness ate through the box and completely destroyed all my childhood keepsakes. The only thing that survived the water damage was my childhood angel, with her burned tree skirt from when those old school 1970’s lights singed her dress. Ahh the memories.

So now I have begun to make my own memories, starting a whole new collection of keepsake ornaments…and I thought I would share my Top Ten favorites with you: 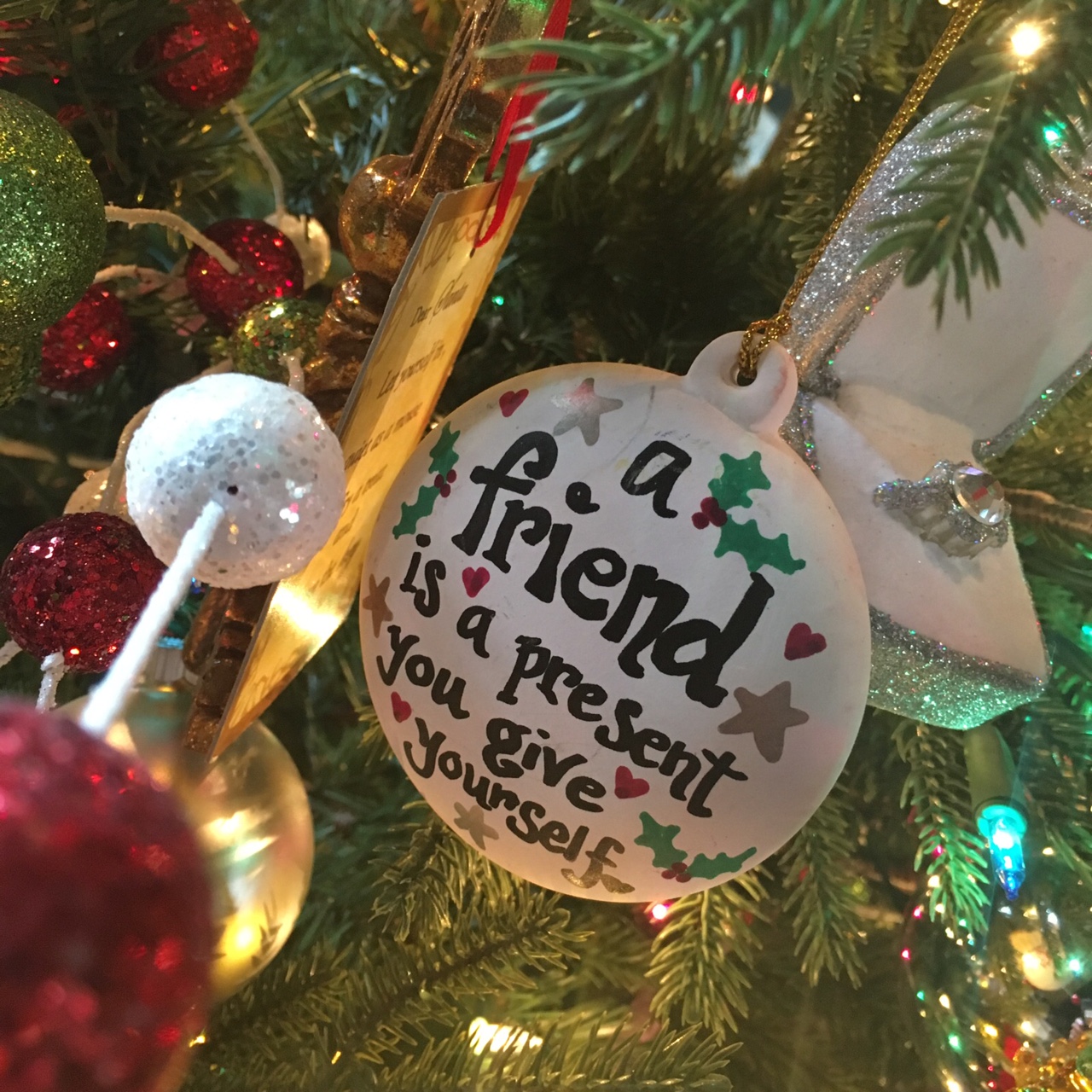 #10 “A Friend is A Present You Give Yourself”: One of my best friends in college, Penn State, was a girl named Jen. She was a sorority sister of mine, and we lived together senior year. We were buddies. She was a PSU cheerleader. She was not even 5 foot, and she had this spunky little bounce. Jen passed away in 2002. She was a newlywed, kidney Cancer. She was 29. An only child. She’s why I collect and love ladybugs, because her nickname growing up was Ladybug and now I believe when I see them, it’s Jen coming to visit. This ornament Jen made for me. I cant remember if it was before she got sick or after, I just remember she used to love to craft, and this ornament I protect with my life. 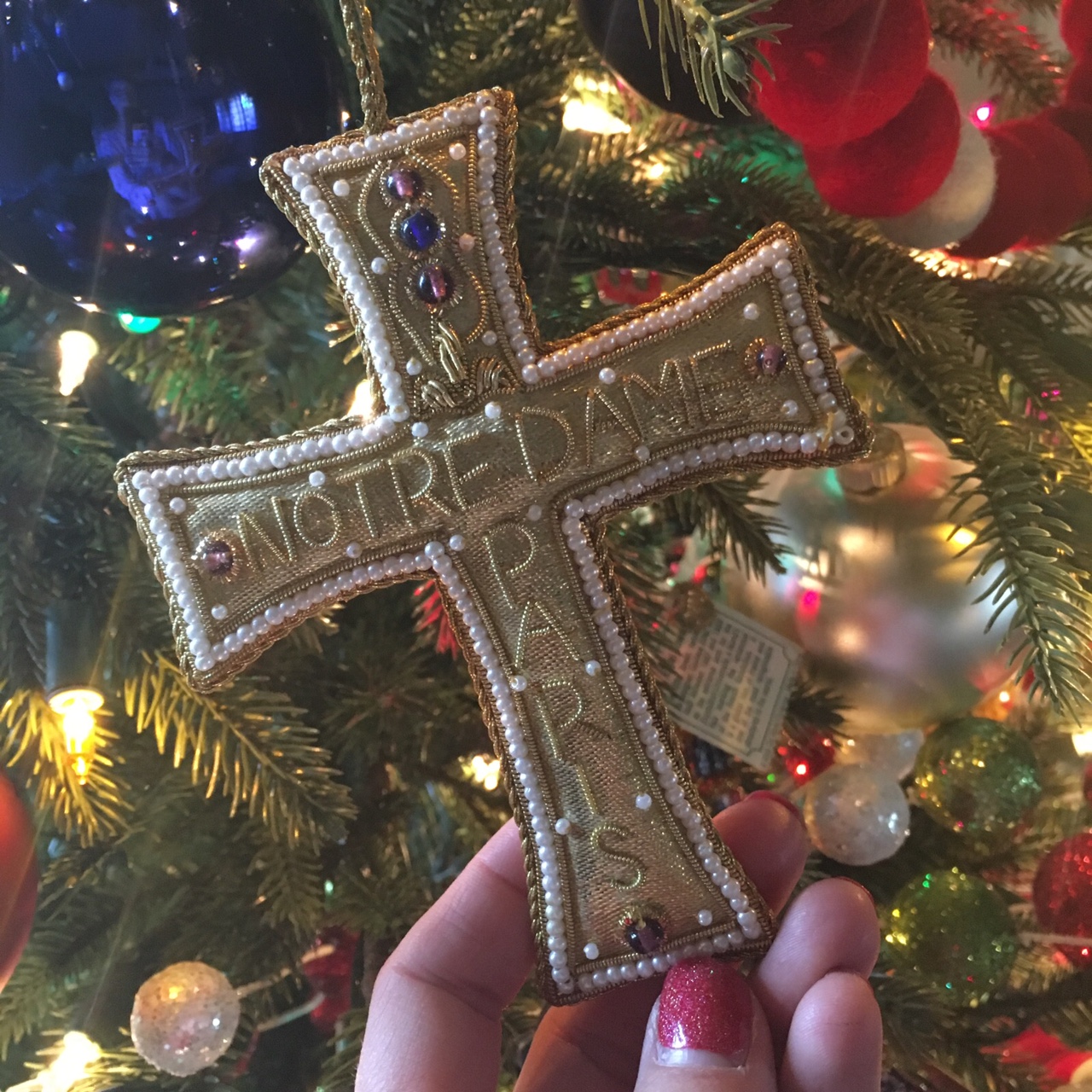 #9 Notre Dame Cross: I love crosses, I collect them. This one Joe and I got on our honeymoon. It was a 2 parter. We first spent a week in Portofino Italy (that ornament is next) and then we stopped in Paris on the way home. This ornament I bought in, well, Notre Dame, along with the most sublime CD of organ choir music that feels like you are in the presence of God himself when you play it. 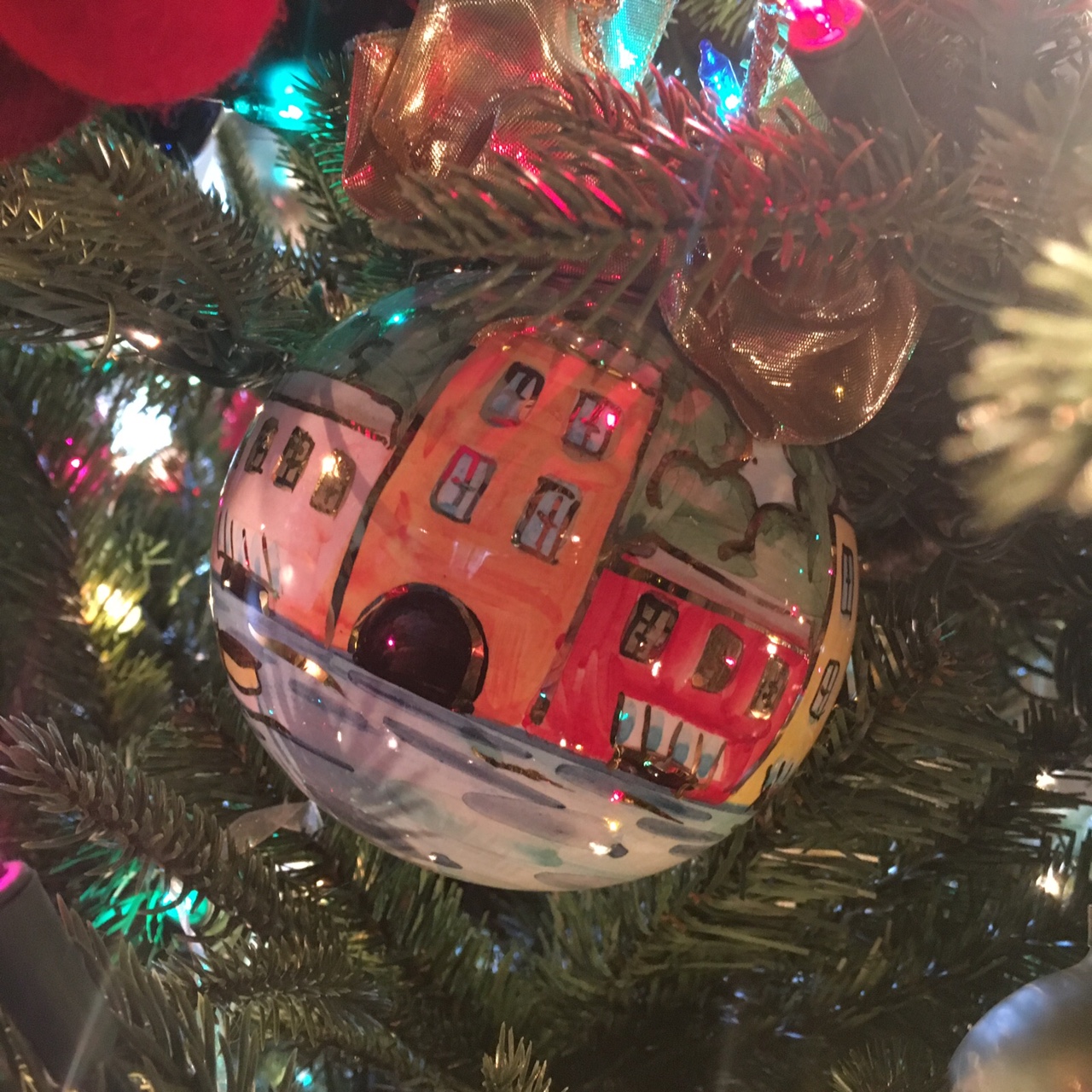 #8 Portofino Village Painted Ball: And here’s the ornament we bought in the tiny town of Portofino, in an art gallery, right off the main cobblestone road heading down to the port and sea. Handpainted, it’s so heavy, solid ceramic, and a memory of one of our favorite trips thus far…just down the street was the village square where Andrea Bocelli played that fabulous concert with Composer David Foster, which was later aired on PBS. 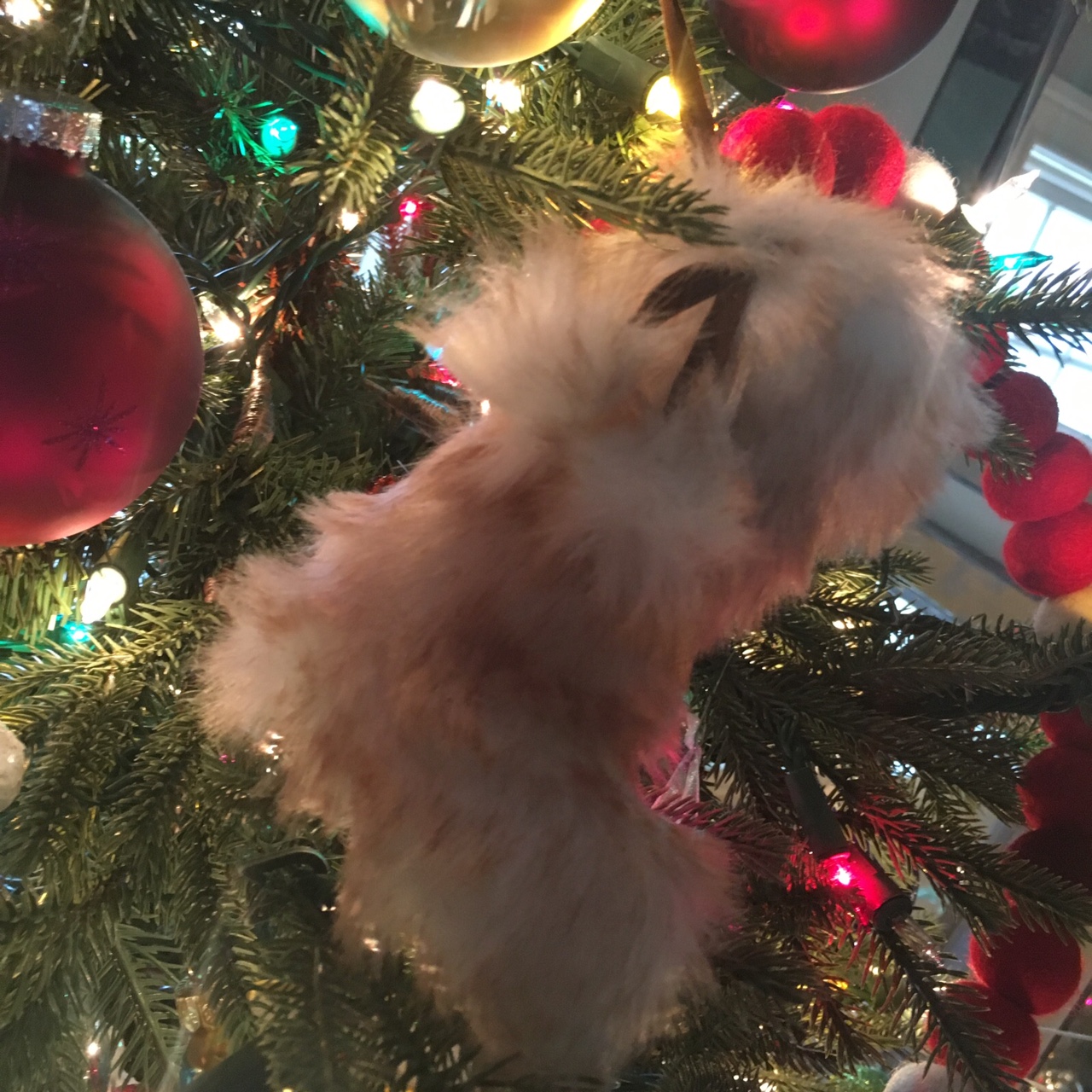 #7 Snow Boot: I grew up in Michigan, and I have always loved snow. I skied as a kid, and I love a great pair of furry snow boots. I have 2 currently, they resemble Chewbacca from Star Wars and I love it. So this ornie my Mom gave me one year bc it perfectly captures my heart for this time of year. Preferably a time that brings snow, and lots of it. 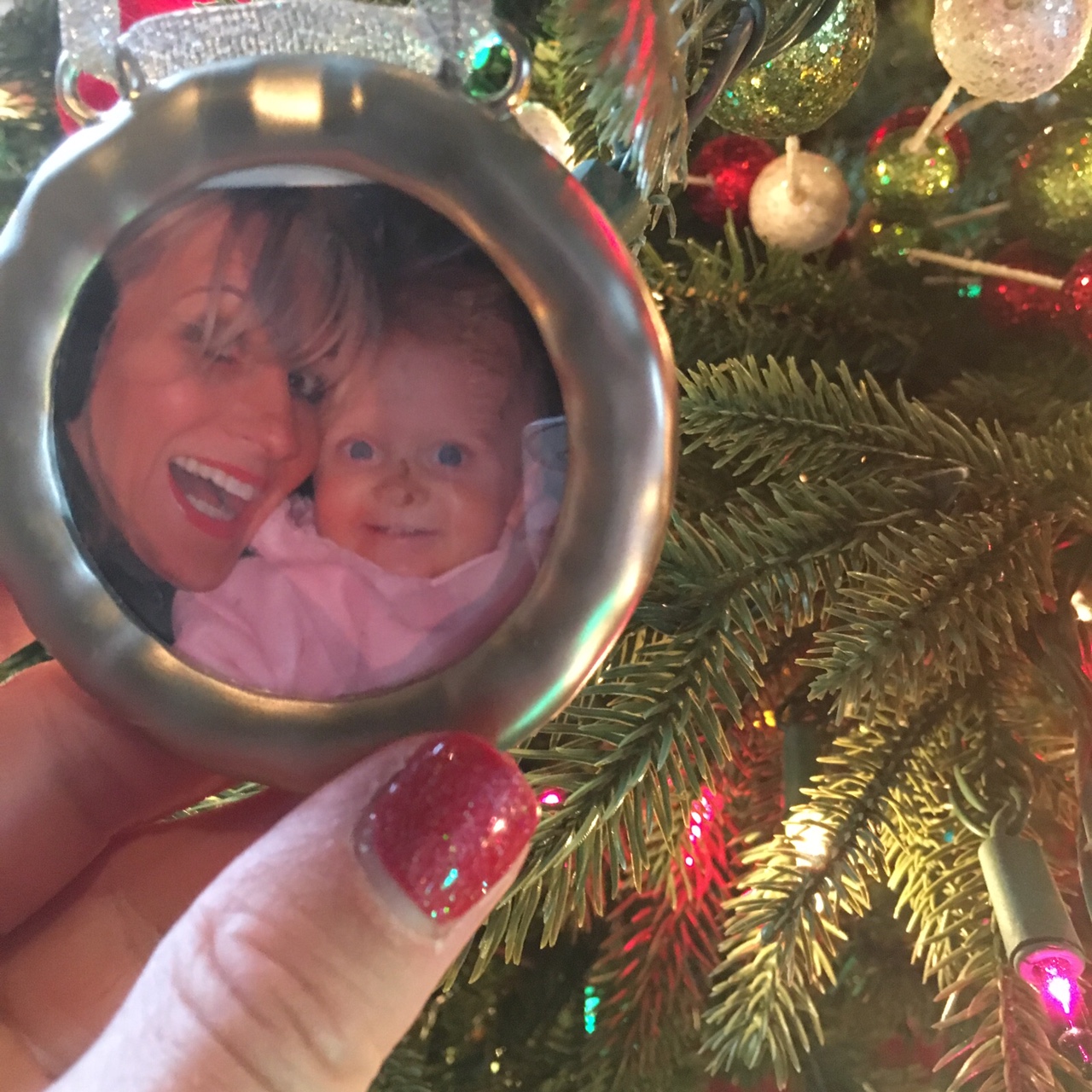 #6 Framed Picture Ornament of my Niece: Sloane is 11 now, but I was there the very day she came into this world, and I lived with her and my brother and sister in law for the first year of her life. I was unemployed, chasing TV dreams and jobs, and I was broke. So I lived with family, and ultimately helped to nanny my niece through her first colicky year. This photo she was around 2, we had gone to Chicago to visit the Christmas markets and she was all bundled up in her gear…I wouldn’t let her go for a second. 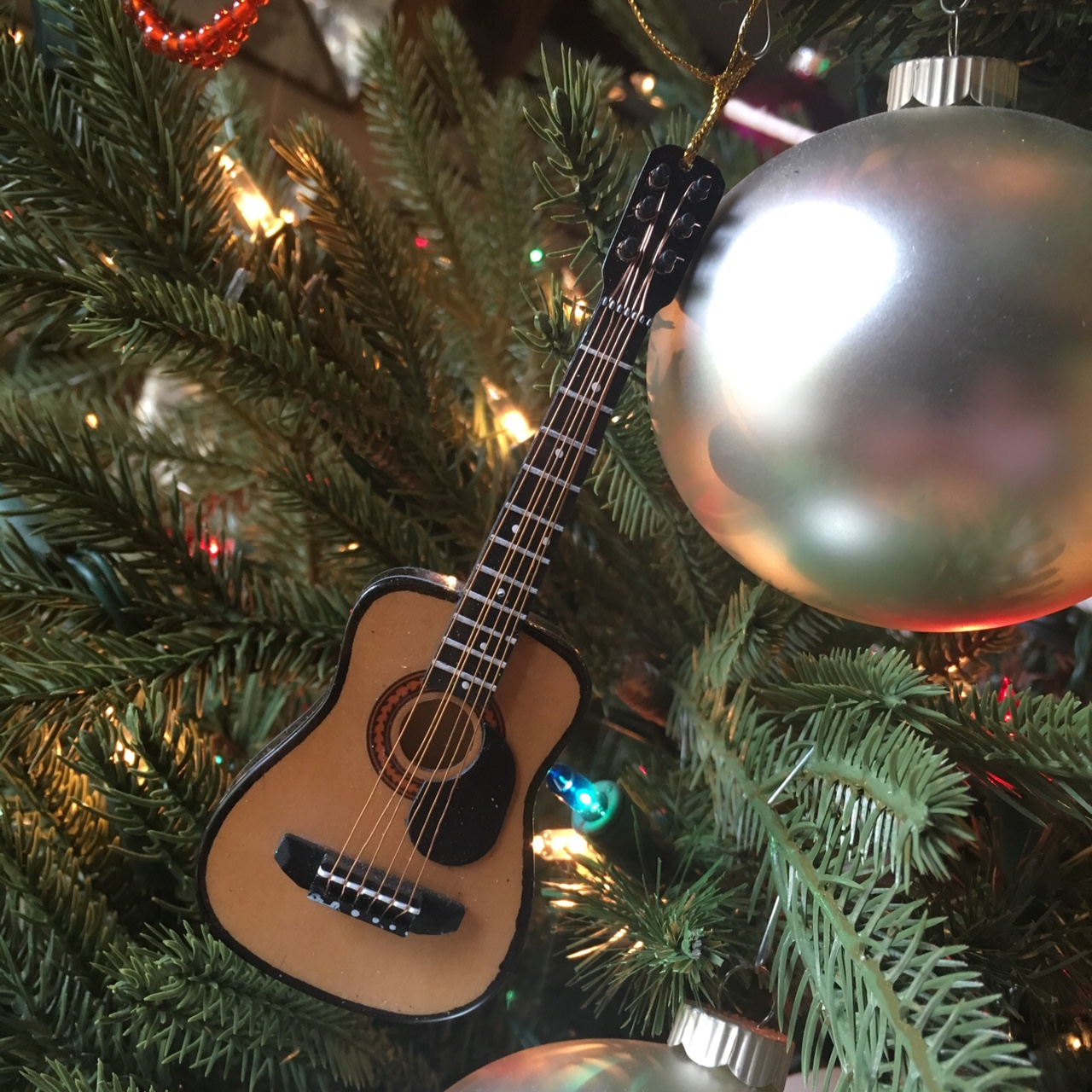 #5 Guitar: When Joe came into my life, he brought a love of music. He is obsessed with playing guitar and writing songs. He owns three guitars and is teaching his oldest son to play too. On our first Christmas together as a married couple, Mom gave Joe an ornament of his very own for our married tree. It was one that spoke right to the passions of his heart. Now every Christmas we are together as a family, Joe whips out the guitar and we sing a Christmas song. 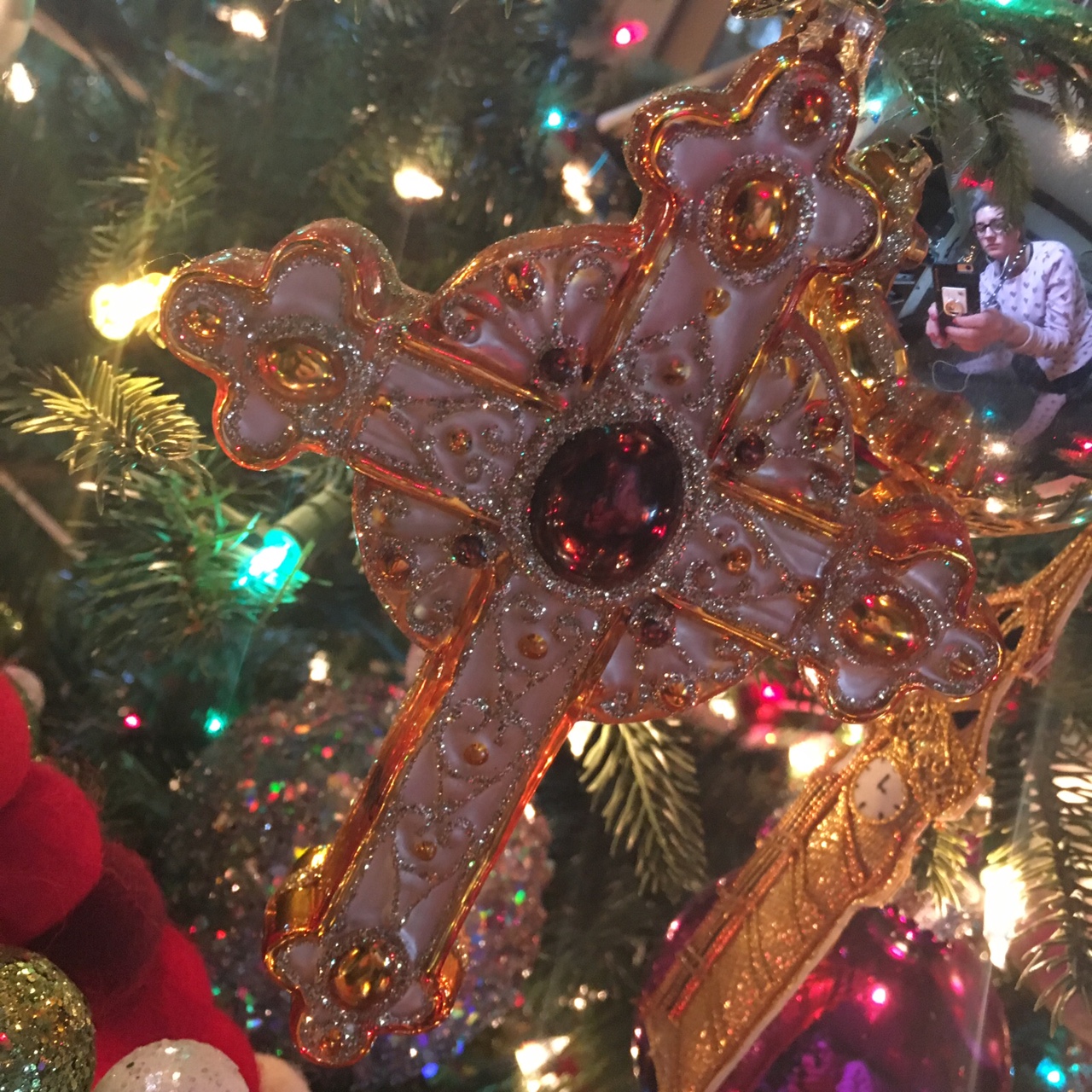 #4 Ornate Cross: This cross is like something out of Westminster Abbey. Another gift from my Mom who has impeccable taste in Christmas ornaments. She knows how I love them, especially those that looked ripped from a cathedral in Europe. They bring such peace and hope to a room, such humility and beauty. This one is so fancy and delicate, “she” gets stored away in her very own padded box every January. She is the grand dame of the tree. 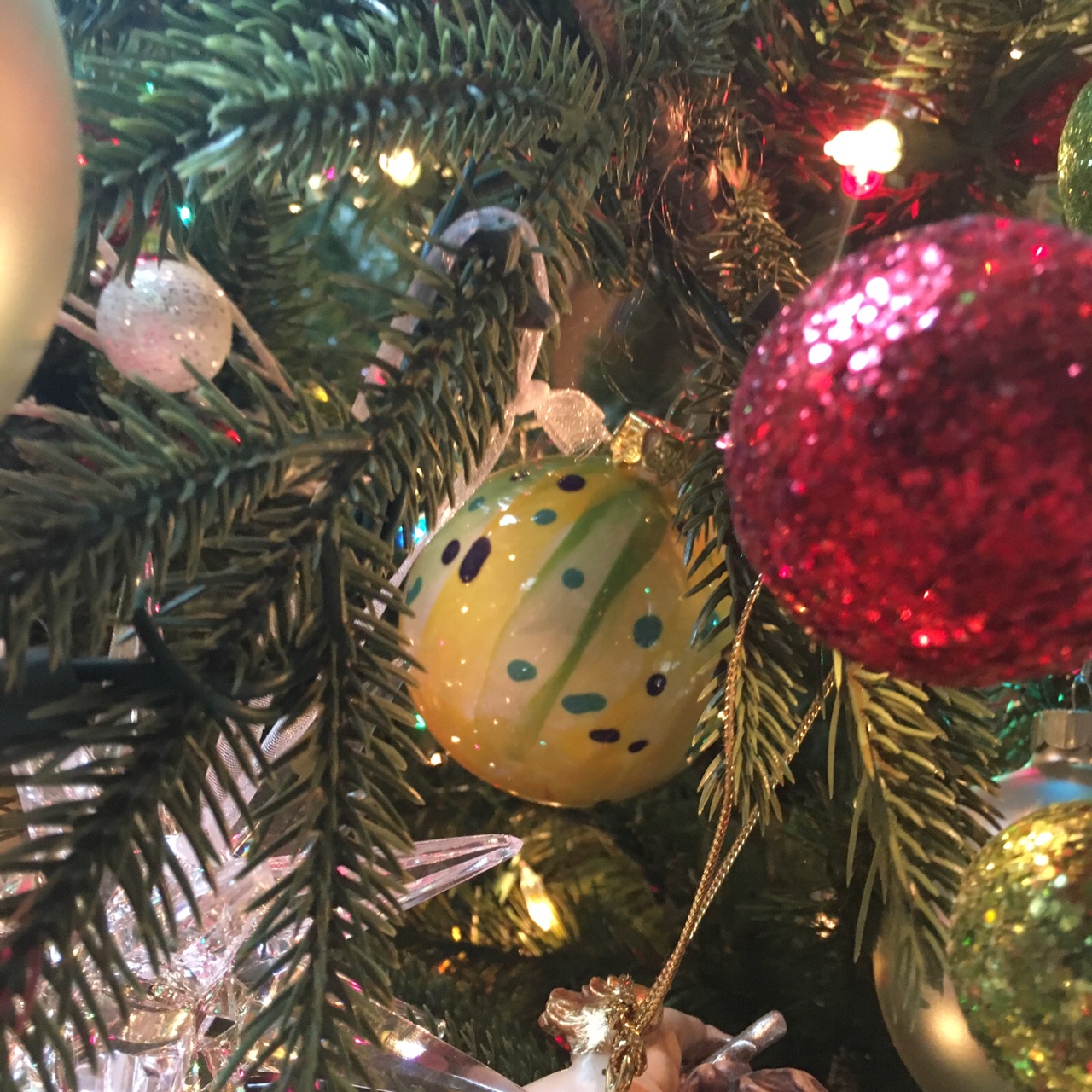 #3 Sloane Christmas Ball: There’s nothing like the innocence and haphazardness of childrens artwork. macaroni has nothing on this Christmas ball that years ago, Sloane painted for me. I give her and her brother Tripp a picture ornament every year so that by age 18, they have an entire collection chronicling their growing up years. This one from Sloane to me before Tripp came along, is a little precious star to me. 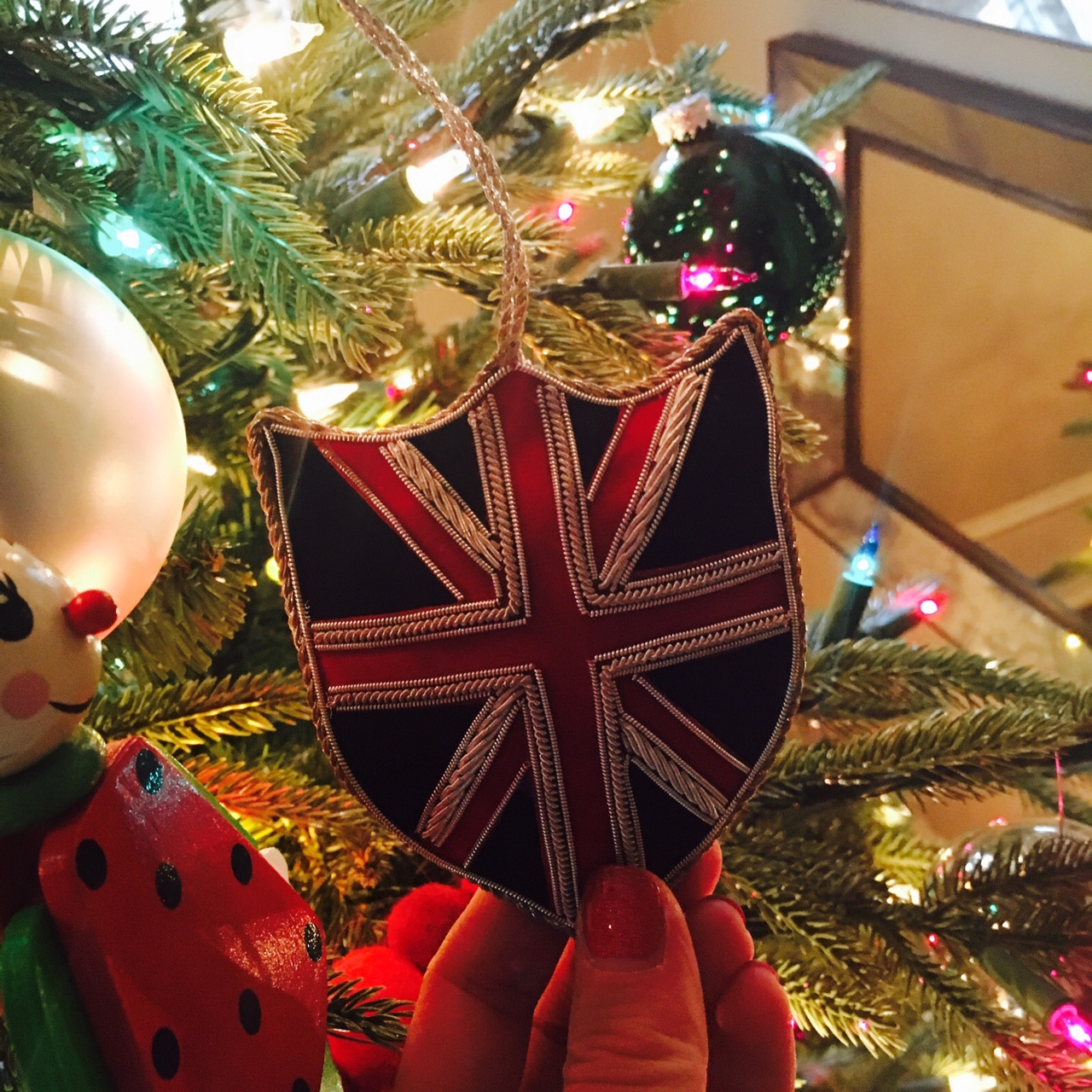 #2 Union Jack: I love London. It’s my favorite city in the world. That’s probably because my brother used to live there so we spent many vacations and Christmas’ visiting him, indulging in all things Brit. Fast forward to Joe and I married, we wanted to take his boys to see the world…they had never been outside of the states. We chose London bc it’s a quick trip, they speak English, and it’s loaded with fascinating things to see and do. This ornament I bought at WestMinster Abbey in the gift shop. To walk the abbey knowing that Kings and Queens have been crowned there, buried there, it is a place thick with history, pomp & circumstance, and regalia. It’s quite extraordinary to me. 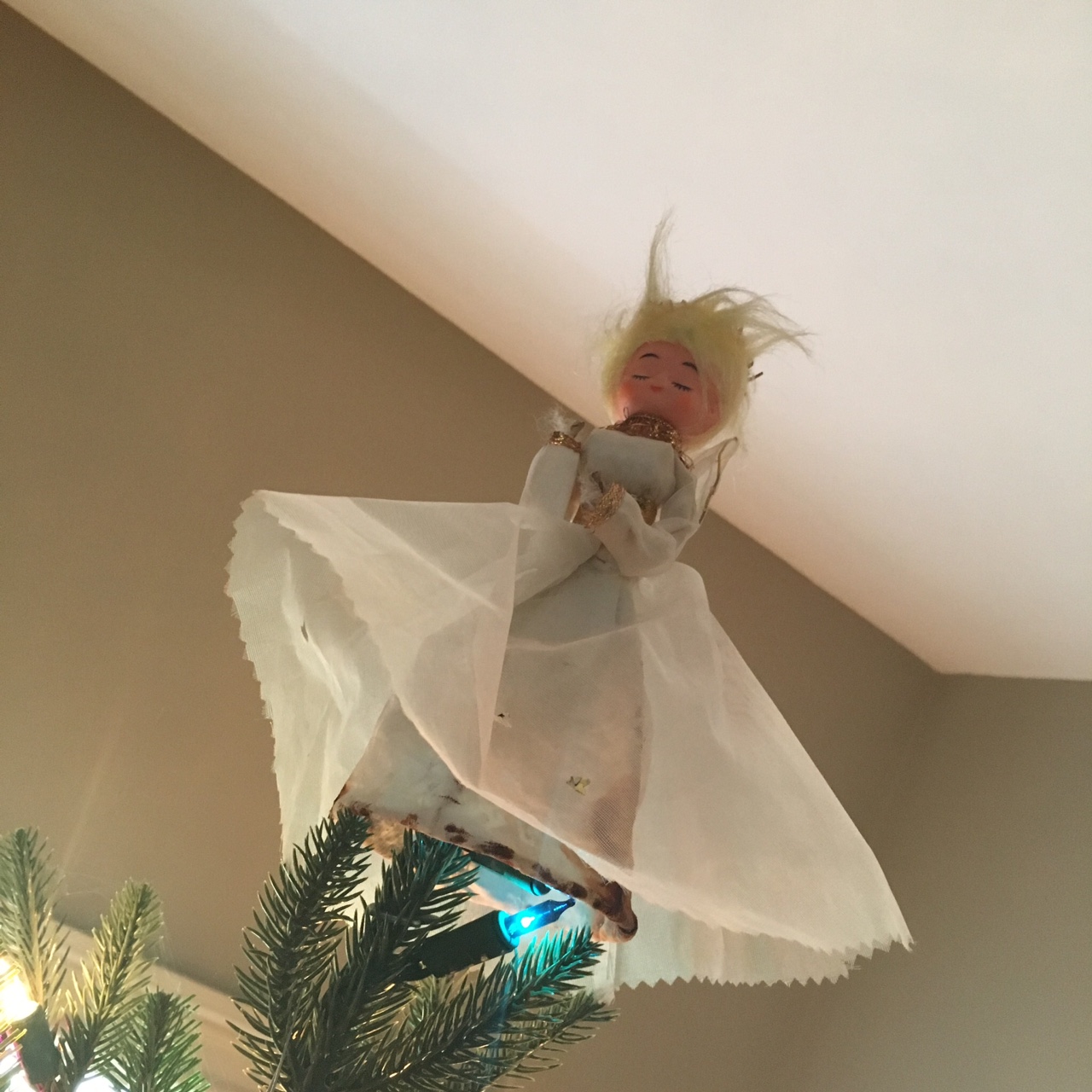 #1 Angel Tree Topper: And there she is, my #1 ornament…the tree topper angel who nearly lost her skirt and to this day, despite matted hair and decades of age, still beams with the face of a cherub. I love her and she is the only thing I have from my Christmas’ as a child, other than memories. She will preside over our tree for as long as I live.