May The Force Be With You

A couple of weeks ago, we had a Star Wars birthday party for my youngest daughter.  Months ago, when she said she wanted a Star Wars theme, it seemed like a pretty easy request. However,  since a lot of the premade decorations seemed geared toward boys and she wanted more emphasis on Princess Leia and Ewoks, we decided we would need to get creative.

Party Prep: We planned a menu based on Star Wars puns. Most of these I found online and a few I made up. We made Storm Trooper straw and utensil holders out of white jars I found for $1 and black shapes I printed onto labels. I think they turned out really cute. 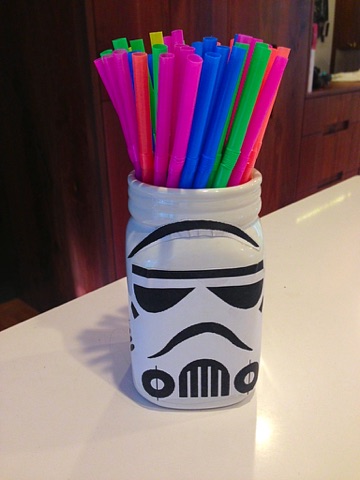 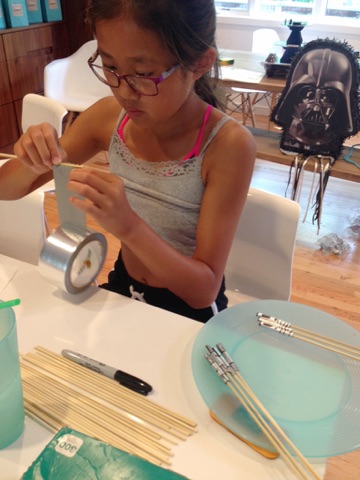 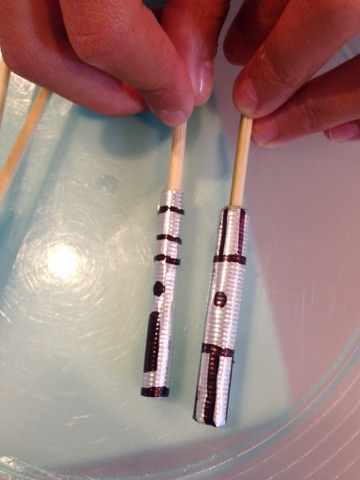 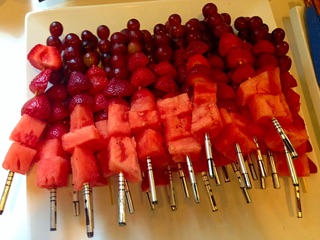 She also made the Pretzel Sabers all by herself. She's a really great big sister! 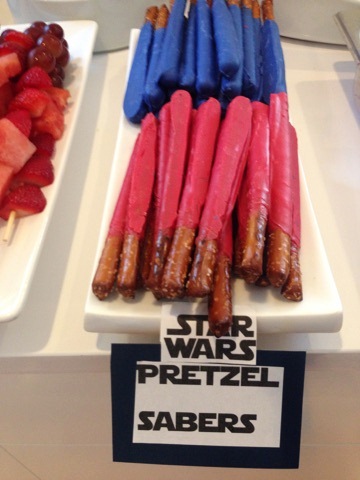 We picked up a Han Solo doll and created his  carbonite prison with Jell-O.  This was supposed to be more of a sight gag then an actual menu item. I didn't think anyone would eat it, but surprise, it was gone by the end of the party. 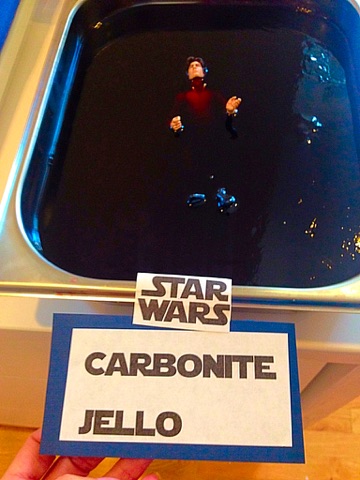 Then came the rest of our Star Wars inspired spread ... 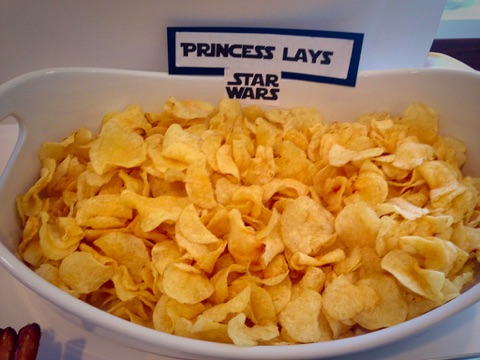 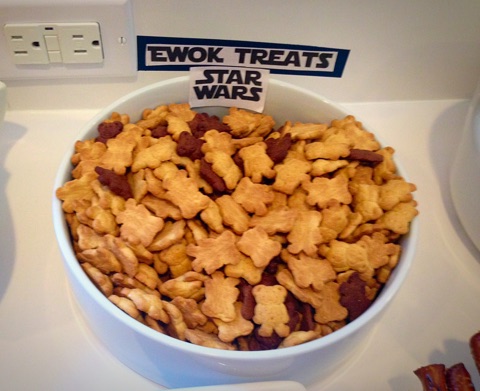 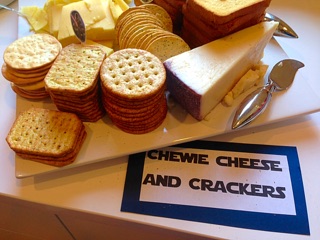 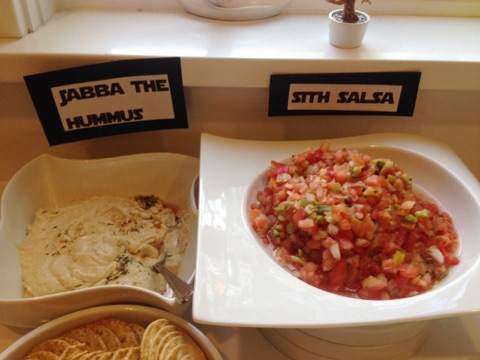 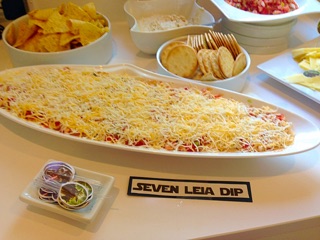 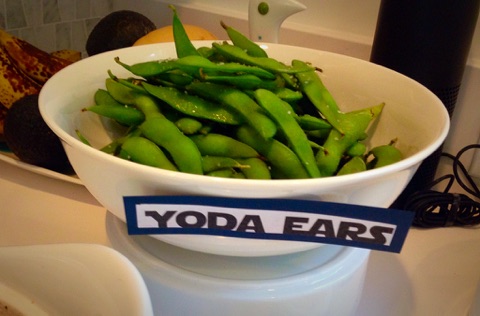 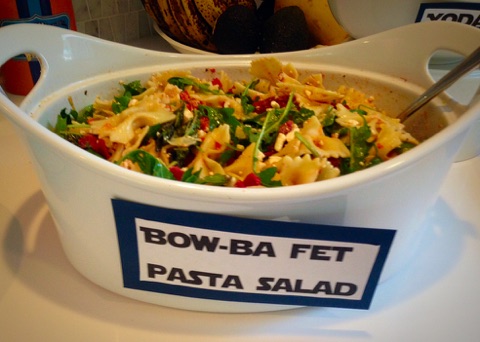 I wish I had gotten better picture of the entire spread, but you know what it is like when you are trying to prepare for a party. I also forgot to get a picture of my favorite menu item. I created a big space on the stove for pizza and on the range hood put a sign that said "JABBA THE PIZZA HUT"

I found this idea online for Princess Leia cupcakes. I made vanilla and chocolate cupcakes. My youngest daughter helped me frost them with cream cheese icing. Then, I decorated them with black icing, little hearts for the nose/mouth, and Oreos to create her signature buns. 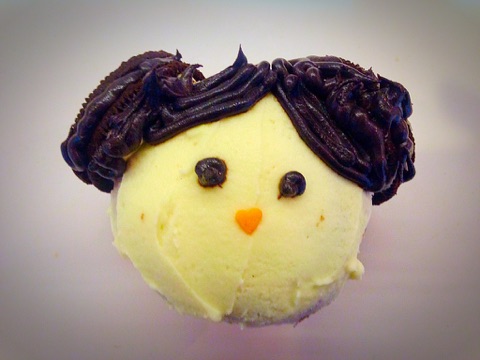 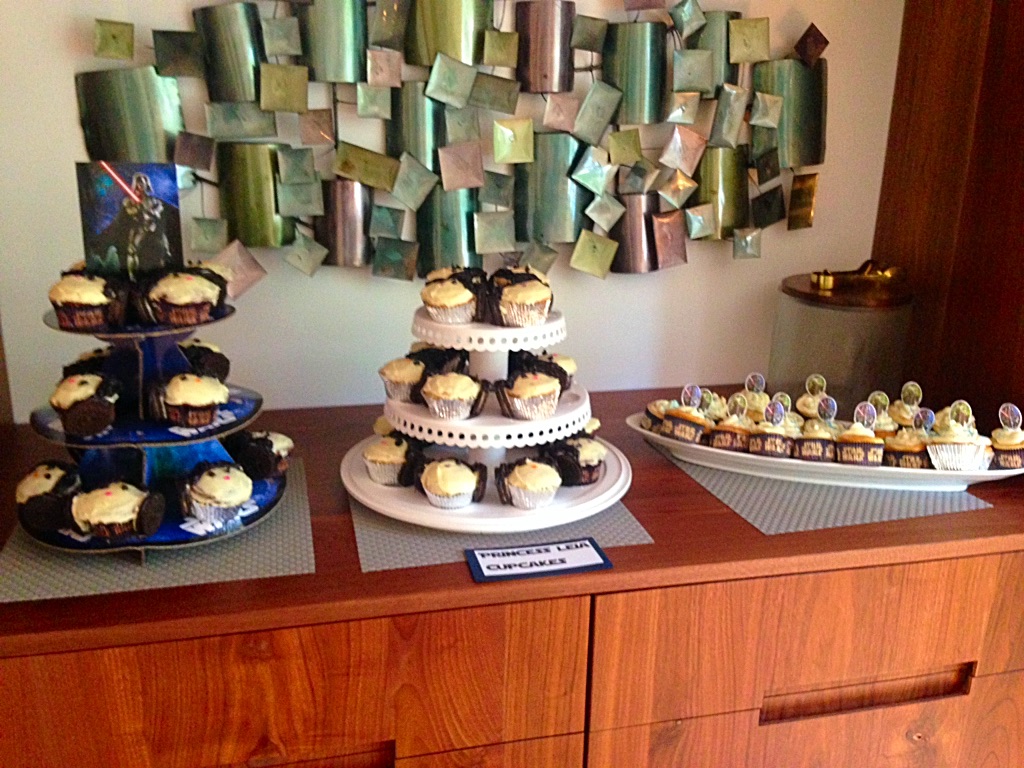 As for entertainment, our friend Robert Elizondo (you know him from Eclissi Jewelry) offered to bring over his kids' inflatable water slide. We made light sabers out of duct tape and pool noodles. The kids had a blast running around the yard, splashing, and deciding if they were going to join the Dark Side or let the Force be with them. We also got a Darth Vader piñata. 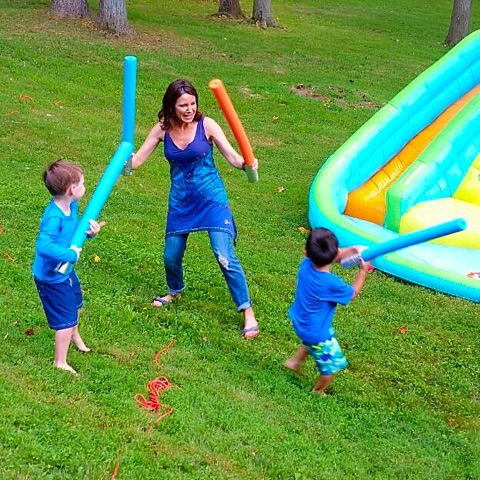 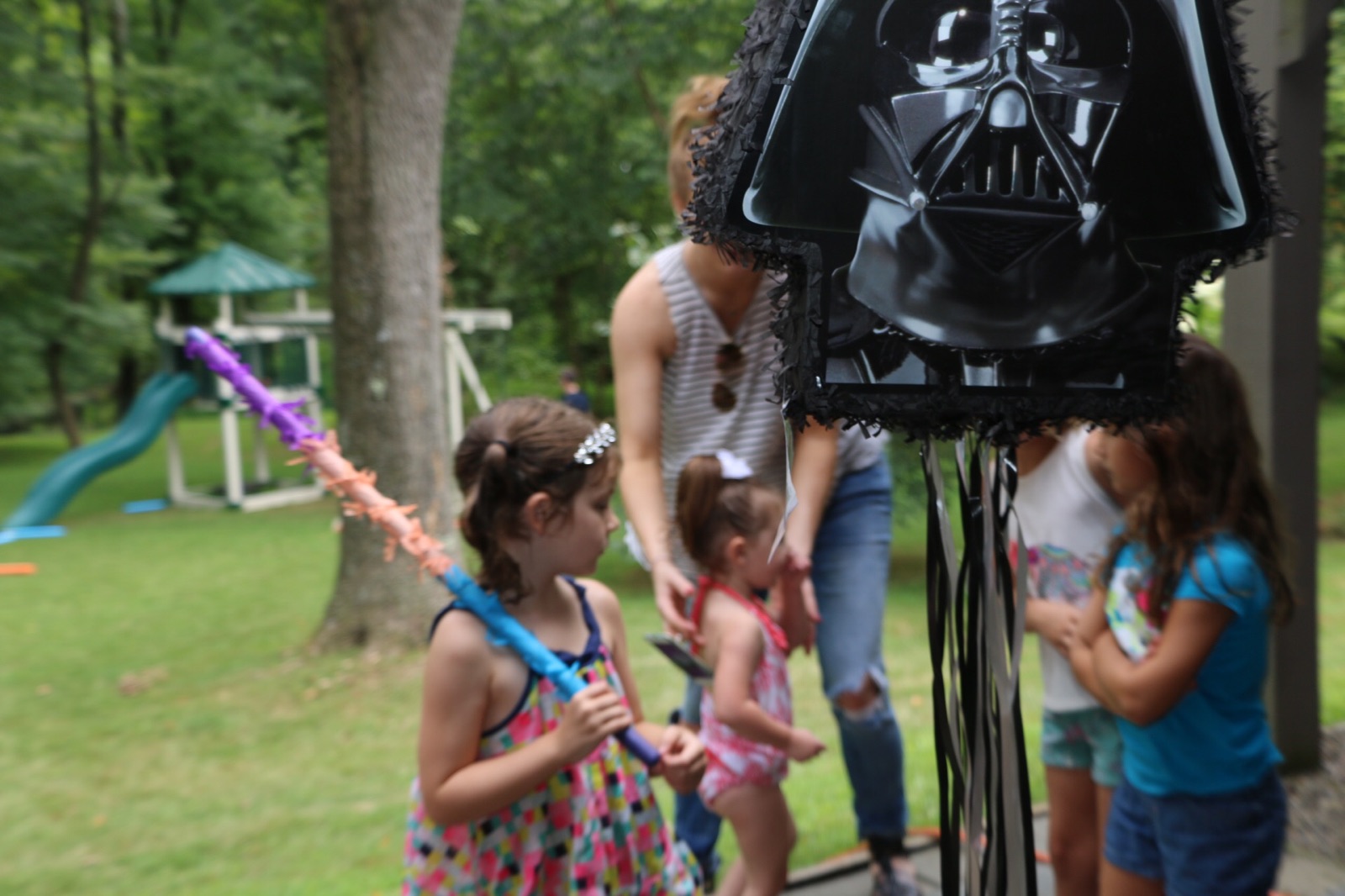 My husband set up a mini photo studio in the driveway and took pictures of all of the kids next to some character cutouts. They were mailed home as part of the thank you note. 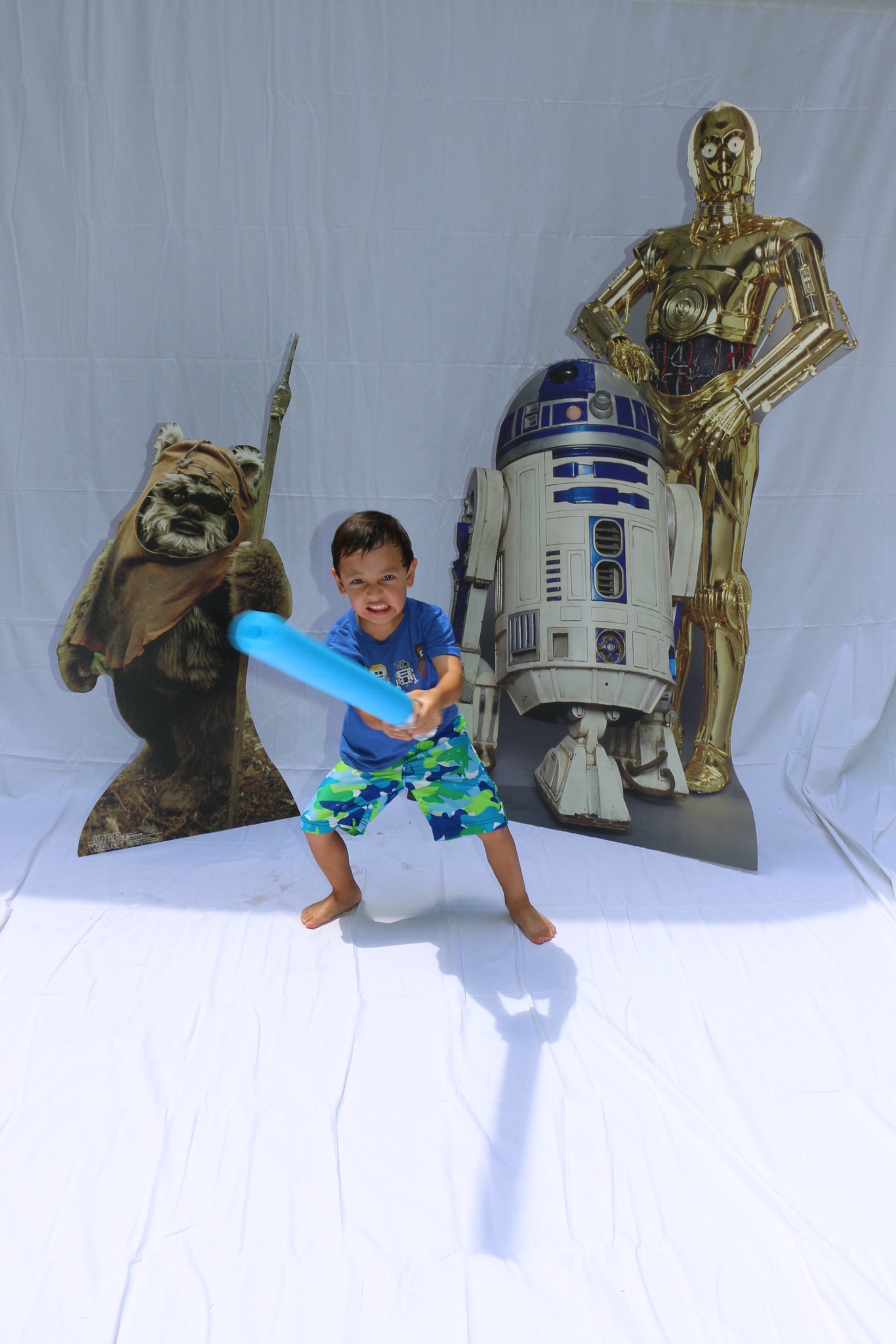 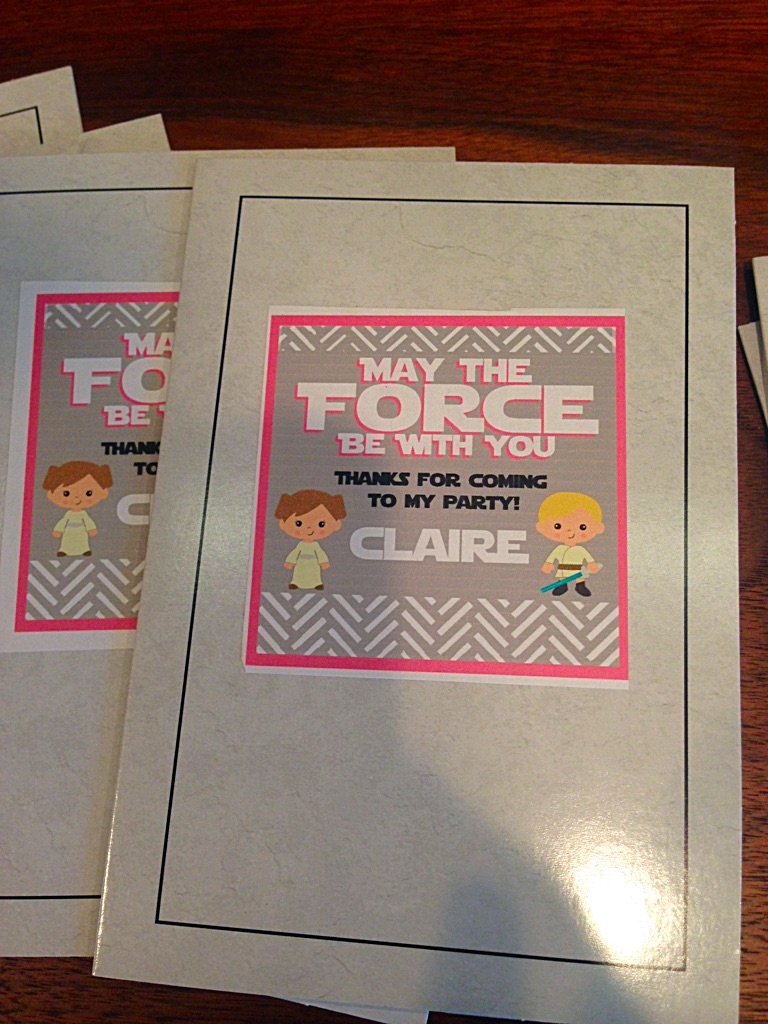 As part of her gift, I painted her three pictures for her room… Princess Leia, a female R2D2 (her request) and an Ewok. I still need to finish the ewok, but I'm happy with it so far. 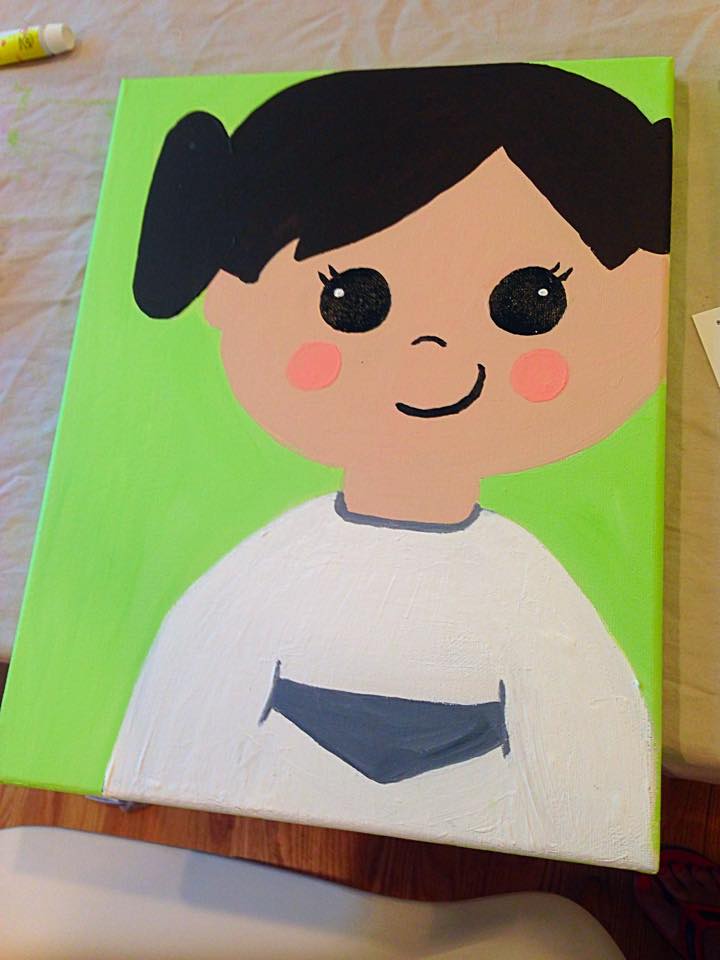 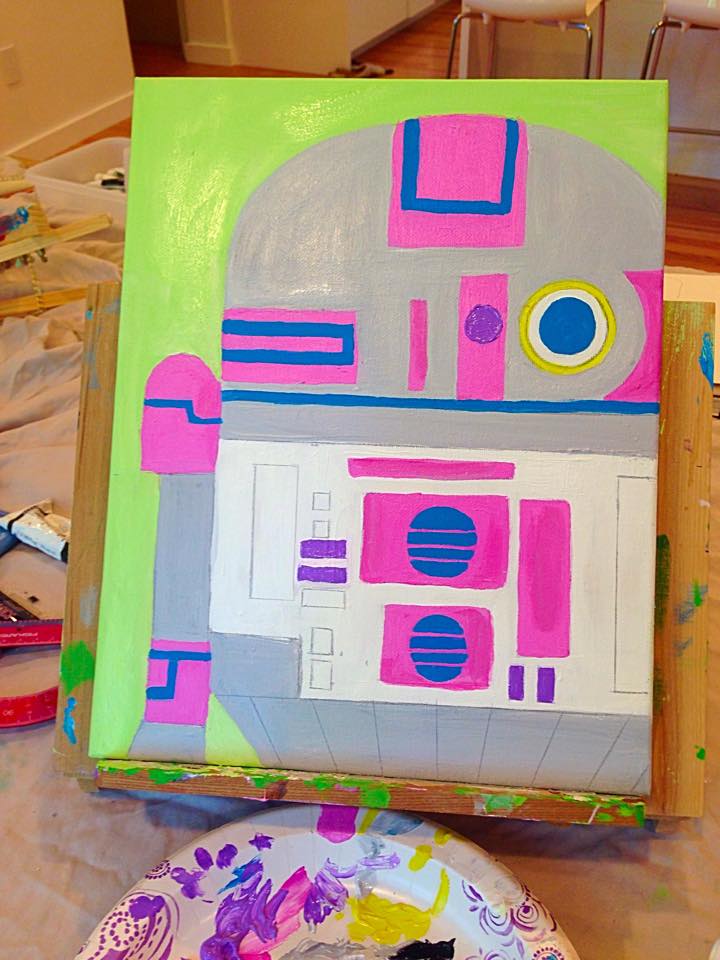 The party was a big success. Now that everything is cleaned up from the big shindig, my daughter has started focusing on Halloween. She says she wants to be a Frida Kahlo zombie. Stay tuned……

Be sure to follow me on social media to find more family updates, some beauty buzz, fashion talk, and of course all things QVC!

Absolutely think ALL of your ideas were so creative and expertly engineered to look so much like Star Wars characters should. I loved this when my kids,(45,42 and 40) were little with the first Star Wars but an planning a Star Wars party soon to be a fun way to entice them into seeing the next 3 adventures films due out soon I think.My grandkids will love it and,now,being a grandmother ,I actually have the time to try this. It will be fun to let them make the sabers as your daughter did. What flavor of Jello did you use???

Thanks for all your ideas and may the Force be with you!!!!

This is all so incredibly creative.  Thank you for sharing all of your ideas and decorations.  It really looks as if all of the kids (and one particular adult) had a great time.

0 Hearts
by 51shopper
Options
Such clever ideas. Looks like everyone had a great time. The theme parties I used to do where so much fun. Probably more elaborate now than 30 yrs ago. Now I'm helping my kids plan my grandkids parties. It also fun.Fun to make memories. That's what family and life is all about. Enjoyed your blog. Thanks for sharing. Til next party.Or should I say Halloween.
0 Hearts
by ShaSha27
Options

Can we get the recipe for the pasta salad.