Auto-suggest helps you quickly narrow down your search results by suggesting possible matches as you type.
Showing results for
Search instead for
Do you mean
Reply
Topic Options
JustJazzmom
Honored Contributor

@MariotaMurielle The sewing of a quilting blanket for the new baby sounds like a fun project. I remember when we were invited to our DIL's baby shower, we were asked to bring a book for the baby's library. One of the shower gifts from someone turned out to be a book case.

Had minor excitement here over the weekend. A pinhole leak by a small radiator has occurred. Waiting on the plumber to come & change out the pipe. Unfortunately one of the basement ceiling tiles got water damaged from the leak & will need replacing. Of course we have no extra tiles. Fortunately, the 2 big box hardware stores can mail deliver a box to us & a paneling ceiling tile place has them in stock so I may just drive there for them. They come 6 to a box. I am not happy with experiencing pin hole leaks but I blame the water district with what they might be putting into our water to disinfect it. It might be corroding the pipes from the inside. Copper is supposed to last a long long time. Our home is 66 years old so it shouldn't be occurring.

Last night I made cacio e pepe, an adult pasta & cheese with pepper. This time I used white pepper. It was good with a side salad. I made a Dijon vinaigrette dressing with pepper & dried tarragon. It was a nice change from the bottled dressing. I used our Oxo dressing holder.

☼The best place to seek God is in a garden. You can dig for him there. GBShaw☼
Report Inappropriate Content
Message 501 of 1,409 (511 Views)
Reply
7 Hearts
viva923
Honored Contributor

not much here today

waiting for clothes to finish in the dryer.

I have a UTI and am now on antibiotics so IDK how much of my "side effects" were actually from the infection or the COVID shot.

I hurried up and got with the doctor yesterday when it was apparent the infection was getting worse.

your wonderful salad reminds me that I have an Orzo Greek salad in the fridge for lunch!

Such fun getting back into the sewing!

not much with me today.Sheet day washing, had 3 large load of clothes, did not even think about hanging out. still kind of showery in spots,to humid,damp,wet,nothing would dry anyway. last load just went into dryer.

Good afternoon! Plumbing company who handles our heating system replaced the boiler valve. It failed as there was water in a bucket yesterday. So now I watch to see if a radiator leaks again. Hopefully it won't.

I will need to visit a flooring ceiling place to get another box of ceiling tiles so I can replace one that got damaged. Fortunately Armstrong still makes the tiles. Just to be sure, I will bring a photo with me.

We now have sunshine after rain last night.

Have some chicken defrosting for tomorrow. Going to make Parmesan/Ranch/Mayo with panko flakes to cover the chicken. This will be oven baked.

Hope you are feeling better @LTT1  UTIs can be tough.

Have a great Tuesday!

☼The best place to seek God is in a garden. You can dig for him there. GBShaw☼
Report Inappropriate Content
Message 505 of 1,409 (398 Views)
Reply
5 Hearts
Highlighted
SleeplessinSD
Honored Contributor

@MariotaMurielle , can't wait to see your sewing project(s) as you go. When is DD's baby due?

Our son and his family landed in New Jersey today. Our granddaughter is a senior this year and has been accepted to a few universities she applied to. Columbia is one. We are so very proud of her. They are out taking some tours. She has a few weeks to decide where she'll go.

I hope everyone's having a good day...Enjoy the rest of the evening!

it's been looking stormy all day but the storms won't actually come in until the overnight hours.

I got a pedicure today with a bright pink polish and splurged on a manicure too. I've had the occasional pedi over the last several months but I've been doing my own manicures at home. I think it's probably been a year since I had one. I got a french manicure with shellac. I know they're not in style anymore but I don't care, I think they're pretty. I keep my nails really short but I had just enough growth to have it done.

DH cooked chicken and spicy sausage shish kabobs on the grill and I had another back yard lettuce salad.

@SleeplessinSD, DD's baby is due in late October but we don't know the exact due date yet. since she's considered high risk she will be followed by a fetal specialist and will see her for the first time later this month. we think she'll have another ultrasound at that visit and hopefully we'll get an expected delivery date and the gender. I'm probably going to start sewing some simple projects later this week but I don't have the manual, so I've been watching Youtube videos.

I've never used a computerized machine so hopefully I can figure it out.

how exciting that your GD is deciding about college. if she chooses Columbia she'll be a long way from home!

sending big blessings to all.

here's a back bay Biloxi sunset.

have a peaceful evening, y'all. 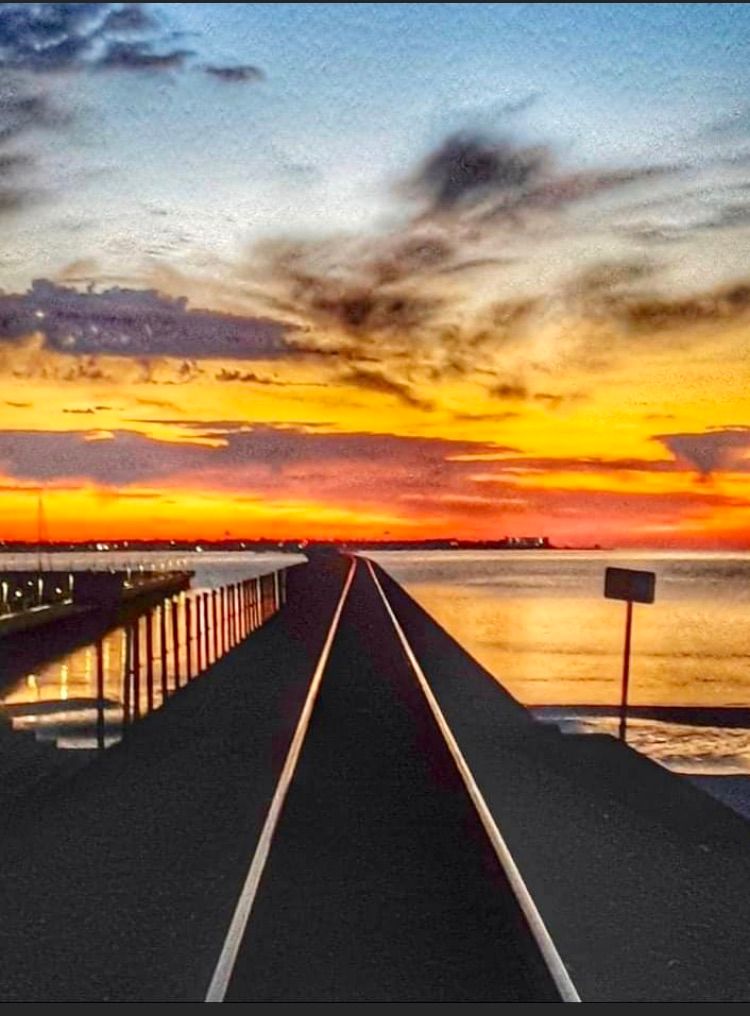 Good morning! So far so good, no leak noted by radiator or water in bucket when boiler valve is above. Will continue to observe but it's not a pinhole leak!

Had busy day yesterday as had service people in to handle boiler valve & do central A/C maintenance.

Now last night when DH went to shower, he told me the shower drain isn't draining well. Have another call into our plumber to snake out line. I keep telling DH that the soap is the problem! Body wash is better!

☼The best place to seek God is in a garden. You can dig for him there. GBShaw☼
Report Inappropriate Content
Message 508 of 1,409 (313 Views)
Reply
4 Hearts
SleeplessinSD
Honored Contributor

@MariotaMurielle , our DGD is adventurous. She's done a lot of traveling through her life with her parents. They took her friend on this trip, as she was accepted to Columbia too. She's excited, but she hasn't experienced fierce winters out that way. It's her choice, so we'll see!
I still like French manicures too! I haven't been in to get my nails done in a long time. The Q had a great item to do pedicures on the other night. I almost ordered it. Btw, I keep forgetting to mention how much I like the serum and lotion you recommended a while back. Really has helped my skin!

@JustJazzmom , my DH likes using soap too! Our house isn't as old as yours, but we also have drain problems...hope you can relax with a glass of wine later!

Waving Hi to Everyone! Have a safe, happy day ahead...

had a 24 hour stoppage of rain back into the wet dank weather pattern again.

soap scum is awful. we use roto rooter drain line cleaner monthly it helps clear the soap in the bathtub but after about aweek the drain gets real slow. we use only bath gel stuff, soap is soap it just gunks things up no matter what.