I was on auto-delivery for Dr. Taub's Nature's Code vitamins and, after several years of taking them, was suddenly informed that the product would no longer be available.  I called Customer Service and was not given a reason why the product was abruptly discontinued.  My guess was that they had gotten too expensive to be sold at the price we had and they did not want to do a huge mark-up.  I really don't know the reason, though.

For me, they seemed to work, and I felt energized somewhat by them.

Perhaps one of my worst QVC moments (although a bit funny) was the time that I called in when Dr. Taub was presenting his vitamins and said something to the effect of "It isn't as though they are snake oil.  Your aren't a snake oil salesman or anything."

For some reason I was nervous speaking on air and my thought came out like that.  Poor Dr. Taub looked thunderstruck and uncomfortable.

My call-in's to QVC were never again accepted.   Guess I know why...

I tried to do a quick Google search, and I found this thread from 2013.

It sems as if Dr. Taub and his company have both just disappeared off of the face of the earth.

The Sky looks different when you have someone you love up there.
Report Inappropriate Content
Message 12 of 19 (621 Views)
Reply
0 Hearts
Poodle Lover
New Member

The Nature's Code Vitamins are still being made, but are no longer sold through QVC.  I kept my Auto Delivery through QVC, so I still get my 90 day supply sent ever 90 days.  I am so glad I never canceled it.  I have taken these vitamins since 2005, 15 years!  They are big "horse pill size" but so far I feel they have helped keep me healthy since I live alone now and probably don't eat a real balanced diet, like I should!  So I hope they don't ever drop my auto delivery!

If you were on AD, you remain on AD even though it's not longer available to purchase from QVC and if you look in your order history it says sold out.

There were a ton of people on AD for this product for years.  When I went on the QVC tour, they talked about this product a great deal as it held many sales milestones.

I stopped my AD because I asked Customer Service if the product would continue to be reviewed and updated, as it had been when Dr. Taub and his replacement were overseeing it.  They could not answer that, so I cancelled my AD and moved over to Andrew Lessman.

I will admit that I never felt better than when I was on NC and I could tell when I skipped a dose.

@Poodle Lover We are on the same plan.  They are the only ones that don't upset my DH's stomach.  We're just waiting for the Q to stop.

I also was on Auto-Delivery for Nature's Code for years and was disappointed when it was no longer available.  I found GNC's packets and am very happy with this option! 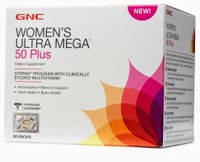 @ Kachina624 - There is something about Lessman that I don't trust, either. I have tried to find reviews of his vitamins elsewhere and nothing comes up.  He is never on lists of the best vitamins to take, either.  At least I've never seen his name appear.

I have been taking GNC Women's Over 50 multiple vitamins for years.

@BornToShop - Just saw your post.  That's what I take.

@ Kachina624 - There is something about Lessman that I don't trust, either. I have tried to find reviews of his vitamins elsewhere and nothing comes up.  He is never on lists of the best vitamins to take, either.  At least I've never seen his name appear.

I have been taking GNC Women's Over 50 multiple vitamins for years.

The reason for this is that they do no marketing.  In order to get on "lists" you have to advertise, send your stuff to magazines, etc.  That's what all the beauty brands do.

In my industry, in order to get on lists, you have to pay the company a fee to get the questionnaire and then you have to spend tens of thousands of dollars to find all the data they need in order to quantify you.  We looked into it about 5 years ago.  We would have had to send out a survey of about 1000 questions to employees to get the data needed to submit the response and then hope we make the list and not come in last ;o)

I was reading an interview once from a CEO about the lists and he was saying that they were #1 on the list for like 5 years and nobody cared until the dropped to #2 and then it was news.

For me, these lists mean nothing.