Auto-suggest helps you quickly narrow down your search results by suggesting possible matches as you type.
Showing results for
Search instead for
Do you mean
Reply
Topic Options
Puddles
Honored Contributor

I felt I must convey the news of @butterfly123 whose post I just read on the beach cafe strand.

My DS and nephew were in a car accident last night. I just found out. Both had head CT’s and sister was transported to larger hospital with a brain bleed”

I’m sorry to convey this to you.😢

@LTT1, OMG, I am so sorry to hear this, thank you for forwarding the message to us!

@butterfly123, Sending lots of good thoughts and prayers to you & your family, please give us an update when you can!

Thank you for your faith filled hearts and prayers.

Here’s what I know

Nephew was driving with my sister in front passenger seat. Man in other car crossed over to oncoming traffic. Nephew had to go off road to avoid car coming straight at them. Nephew hit utility pole.

Airbags did not deploy. Car is totaled.

Man admitted to police he was at fault. Man works in the medical field. New to the community.

Nephew and sister taken to local hospital. Both had head CT’s. Nephew is shaken and experiencing headaches. Nephew was released from hospital last night.

Sister had to wait for available transport (don’t know wha5 caused the delay in transport) Sister was taken to larger hospital 100 miles away. More scans and testing were completed and bleeding has ceased.

Sister has headaches also. She will be released from hospital soon.

Both sister and nephew have upcoming doctors appointments.

Will have to wait and and see if headaches persist.

I humbly ask for continued prayers for my family members as they continue to heal. Hopefully, no further complications.

Thank you. I’m relieved that the bleeding has stopped. 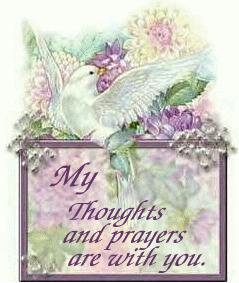 @LTT1 Thank you for posting the message, I couldn't get it to post when I tried earlier.