Auto-suggest helps you quickly narrow down your search results by suggesting possible matches as you type.
Showing results for
Search instead for
Do you mean
Reply
Topic Options
meallen616
Honored Contributor 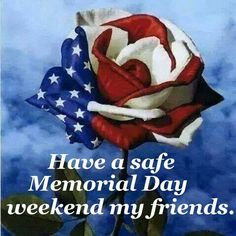 @Malcontent Can you suggest what you would like the Q and other companies to do? I encourage my employees to come with a suggestion if they are going to complain about something.

QVC is like any retailer. They view this as the start of the summer selling season. I probably will not have TV on for much of the weekend.

Memorial Day is a federal holiday in the United States for remembering and honoring people who died serving in the United States Armed Forces. (Not for teachers and nurses who serve every day or a holiday that you give a gift of philosophy fragrance to someone in the military, as per Amy Stran - epic fail 2 years in a row, such an embarrassment)! Great job QVC!
Report Inappropriate Content
Message 15 of 28 (204 Views)
Reply
1 Heart
Twinkletoes62
Contributor

Get over yourself and find something to do to help others.

Memorial Day - Post Your Memorials Of Loved Ones who Served

I'd typed this and then went to bed last night.  When I opened up my computer, it came up.

I apologize if I'd already posted it but I couldn't find it anywhere.

Then I thought...."it's really about MY loved one and what he/we experienced during the last war".  Then I thought, "I haven't seen other's post some of their memories of their loved ones".

Many of us are old enough that we do have memories of the last war.  I figured I'd better not post the name of it because it might get zapped.

Please post any memories you have about the last war.  These are mine about my late husband being an Honor Guard at Ft Myer, Va.

I've spoken of this before but on this day it bares repeating.

So, I've mentioned my late husband was in the Honor Guard at Ft Myer, Va.

For those who don't know, they are a part of the military that, not only guard the tomb of the Unknown Soldier but they're the military who march in parades.  In my opinion (and many of the men's) their most important job is to bury the soldiers (all of them) that died.  During the time he was in the Army, most had died fighting in Vietnam.

My husband told me there were times his unit would bury as many as 100 per day!  Can you imagine the toll it puts on a person to do something so sad day after day?

We were newly married at the time.  We got married when we were both in our teens.  We knew each other 3 months before we got married!

Look!  During the war you didn't waste time because your loved one could get shipped out to Vietnam any minute, any day.  You made the most of what time you had together.  You try not to think about it, but it's always in the back of your mind.

A little known fact is that in the mid 60's the Army put on a show at the foot of the steps at the Jefferson Memorial in Washington, DC.

The show was a living history telling visitors all that the Army was doing in battle.  It was grueling and extremely dangerous and difficult.  My late husband was the star of that event.  He demonstrated (in his fatigues, with fluorescent paint on his boots) how the military fought hand to hand with the enemy.  The fluorescent paint was so that (as the sun set) you could see the movement of his feet as they went up in the air, twisting and making contact with the soldier who was dressed as the enemy.

There were no 'fake' machetes.  There were no fake guns.  They were all real, but, of course, the guns weren't loaded.

I remember one time my husband came home and his fingers were all bandaged.  I said, "What the hay happened?"  He laughed and said, "The enemy didn't come down with the machete the right way and he almost cut off 4 fingers (that was from holding up the gun to protect himself as the machete came across it).

Another time (right before we got married) he showed up for a date with his wrist in a cast.  Again, he'd been doing flips (against the enemy) and he landed the wrong way and .......

Quick story about that incident.  My late husband was determined to marry me WITHOUT that cast.  Well, the problem was we were to be married in 1 week.  So, what did he do?  He took a knife and cut the cast off.  Then he took an ace bandage and wrapped it around the cast.

Every time we had to pose for pictures and throughout the wedding, he remove everything.  Problem solved!

He was training to be an Army Ranger when he was called into the Colonel's office and asked if he'd like to be in the Honor Guard and put on a show for the Army!  My late husband was extremely athletic.  He'd joined the Army at the age of 17 just to get away from his family.  He could do flips, he'd walk everywhere on his hands.  Like I said, he was very athletic.  The day he died, he could still do a flip and walk on his hands.  He maintained every muscle he'd worked so hard to get way back when he was a very young boy .  He used to box in competition.

Eventually, the powers that be, decided it was too violent, so the show ended.

I remember all of the preparation my husband went through just preparing to be a part of the various ceremonies and represent the U.S. Army.  His hair had to be shaved (with the hairs an exact millimeter shaved) (they were called 'white walls'.  The top of the hair had to be cute exactly the same so the hat could sit perfectly on his head.  Creases in the pants?  Again, perfect.  That was just some of what needed to be done to prepare for visual life as an Honor Guard.

Throughout our lives together, my husband would always talk about the families of the men (and a few women) he buried.  He'd tell me how devastated they were.  For some the grief was just too much.  One of the burials he never forgot was the Mother who actually jumped toward the casket (as if she wanted to go into the ground with her son).

So, on this day.  When you see a soldier, think of all they've done for us.  If you're lucky enough to go to the Tomb of the Unknown Soldier, or unlucky enough to participate in a soldier's funeral; know that these soldiers whom the family has entrusted with burying your loved one takes it very seriously and actually appreciates the trust you've given them.

In closing I will say that when my husband died, he was buried in the same ceremony (horse drawn carriage, etc) 21 gun salute, etc. that he'd participated in so many times long ago.  He's buried at Arlington National Cemetery along with my Dad and many other brave young men and women.

@East Quogue wrote:
Memorial Day is a federal holiday in the United States for remembering and honoring people who died serving in the United States Armed Forces. (Not for teachers and nurses who serve every day or a holiday that you give a gift of philosophy fragrance to someone in the military, as per Amy Stran - epic fail 2 years in a row, such an embarrassment)! Great job QVC!

@East Quogue    couldn't help noticing your nic... a place near and dear to my heart :-)

As you all disparage the OP for her opinion of QVC and the commercialization of Memorial Day, just remember the fallen died so she could have an opinion too.

As you all disparage the OP for her opinion of QVC and the commercialization of Memorial Day, just remember the fallen died so she could have an opinion too.

@blackhole99. Also remember that everyone does not have to agree with the OP and they are also allowed an opinion.

I don’t understand why you only want one opinion.