Empty Shelves In Your Area?

When I ran by the grocery store today, I noticed several empty shelves, apparently wipes had been there.  The manager had put a sign there to say that they were limiting those items to two a customer so everyone could get what they need.

The world has gone absolutely nuts. People here are grabbing random stuff and hoarding ridiculous stuff....how many boxes of saltines and pkgs of bacon do you really need to quarantine for 14 days? 8 boxes of crackers and 6 lbs of bacon? The toilet paper thing has me baffled. If we are required to stay in for 14 days, it is starting to sound like a good thing after dealing with craziness in the stores; no more for me. I don’t fight anyone for soup or toilet paper. Btw, paper napkins are in full supply, so buy those instead.
Report Inappropriate Content
Message 2 of 60 (1,756 Views)
Reply
9 Hearts
happycat
Esteemed Contributor

There were empty shelves when I went Wed. night, but there was bottled water and plenty of paper towels. Just no toilet paper to be found and I went to three different stores.

I went back to town today, there were way more empty shelves than wed.

There was no bottled water, no toilet paper, no paper towels, only a few bags of dried beans. A lot of shelves were just half empty.

I have never seen anything like this. And I'm afraid we are nowhere near it being over.

Yes.  Today the paper goods and all sanitizer products were wiped out.  The meat counter was very limited in selection.  The store was very crowded.

I actually just returned home from the grocery store. For the last several weeks, I have been doing my regular grocery shopping and picking up extra things here and there.Mostly non perishable type items.  I decided tonight to head to the grocery store and finish stocking my freezer. I leave work and the first store that I go to has a line coming out of the store, and down the side of the building. This is a huge grocery store out in California called Winco. I found out later that they had to close , too many people in the store. Think Costco size. I refuse to stand in line for groceries, especially when I have some, so I head to another store. The parking lot is so full (Stater Bros) that I actually ended up parking in the lot next to it. I saw aisle after aisle of empty shelves. I'm not talking about the regular items that we have been hearing about shortages on, I mean everyday items that you could possibly think of. Meats, breads, cereals, milk, eggs.

I actually ended up purchasing more items then I had planned, long lines to pay, but I can say that I am done, and have no need to go to a grocery store for at least the next month.

@icezeus @tansy You're in a different situation than I am.  I only saw those very few shelves.  No problems anywhere else in my store.

I will say, that at this time, there are no cases in western NC.

I wasn’t there but when I looked at my towns FB it sounded like all heck had broken loose. Small store,small town. Lines front to back, empty shelves, long waits.

It will die down in a few days. Plenty of stores in the area to go to if need be.

Just got back from Trader Joe’s 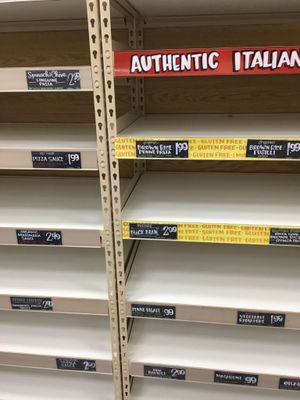 I have taken this situation very seriously and in the last few weeks have stocked up well on everything.  However, panic is contagious.  Today I was in Walmart and I have to admit seeing everyone frantically shopping caused me to buy some extra items. too.  All of our stores are stripped of toilet paper, paper towels, and clorox wipes.  Hand sanitizer hasn't been available for weeks. But today it was sobering to see even aisles of beans, rice and canned goods stripped as well.

All schools, colleges and now churches are closed.  This truly is an unprecedented time.  I wonder about the stress that the constant 24/7 barage of virus news is doing to people mentally.

Yesterday all the stores in my area were out of toilet paper. Today the stores are out of most food items especially meat and nonperishables.

A friend went to one of the Walmart Supercenters and said it was awful, little to nothing on the shelves and people were acting horribly.

“The price of light is less than the cost of darkness.”
– Arthur C. Nielsen